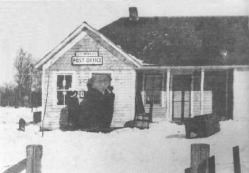 My kids and grandkids came up for the big day too. It was quite the celebration. Some of the staff at the home made me banner, one of the nurses baked me a cake. A hundred years is a long time to live. I think I’ve made the best of it.

I was in love.

I looked at the picture for a long time. After some thought, I told my grandson to keep the picture. I told him what that picture meant to me. I told him about the ferries and sawmills that have long been erased from the nations consciousness.  I told him that when go off with my wife, Paul, and Uncle Nick, to listen to the picture.