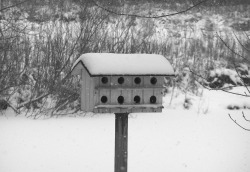 If you’re in Minneapolis it’s not that long of a trip. Lots of folks go up there for the weekend. All you need to do is take 694 to Highway 65, and then go north about three and a half hours, no big deal. I tell people to keep driving until their cell phones don’t work and then take a right.

The gravel road that leads to my house always needs fixin’. I pay my taxes like everybody else, but for some reason nobody wants to fix it up for me. When the rain comes down too hard or the snow falls too thick, I’m stuck in my house until it dries up.

I like my house. That’s where I spend most of my time. It’s a cozy little place with a wood burning stove, kerosene light fixtures, and knotty pine walls. I love the smell of my house. At night I spend time reading magazines about fishing and watching the birds come and go outside of my window.

I haven’t been fishin’ in years.

Two summers ago I bought an old blue boat with an 18 horse Mercury on it.  It runs real nice and I keep it in good repair. I borrowed it to a neighbor once, but I haven’t had a chance to use it myself yet. I’d like to use it for fishin’ and duck hunting.

I used to have an old hunting dog named Dave. He was a good dog. I’d go outside with him everyday and watch him sniff around. He loved sniffing. He’d rub his nose on everything he could find—garbage, fish guts, mushrooms… anything. One day we were out for a bit of a stroll and Dave was sniffin’ around as usual—He liked to run ahead sniff—anyway, he sniffed and sniffed off into the distance until I couldn’t see him anymore.

After that Dave never came home. That was four years ago.

When Dave left I called the police, but they didn’t do much. I told them that I pay my taxes like everyone else, so they should find my dog. They said they would look. I don’t think they ever did.

The police did catch the guy that took my fishin’ stuff. I was so mad at that guy. He took stuff from my shed and robbed all the rest of the cabins along the lake too. He took TVs, radios, boat motors, and all sorts of other things from the summer people up here. I was really mad.

On a beautiful winter day about two years ago, I was sitting in my house by the fire reading an old cowboy book. Out of no where I saw this guy on a snow mobile pulling a sled filled with all sorts of neat stuff. Normally, I’m the only one who is up there during the winter, so I found it really odd to see this man on the snowmobile.

I stood up and walked to my window to examine the sled more closely.

At first I went to my closet and grabbed a shotgun, but after some thinkin’ I decided shooting him wouldn’t be a good idea. So anyway, I decided to call Hurley, our Sherriff.

The phone rang a bunch until finally Hurley’s wife answered. She told me he was out on Blackface ice fishin’. I put on my jacket, hat, mittens, and scarf; started my truck; waited for it to warm up a bit; and drove to Blackface.

Blackface is little spot of a lake a half a mile down the road from my lake. My lake is called Little Ball Bluff. It’s connected to Big Ball Bluff. The lakes got there names from the tall rolling hills… or bluffs that surround them. The smaller lake that I live on is only about 500 square acres, but every square inch of it is spectacular. Little Ball Bluff is a beautiful lake.

Blackface is not so beautiful.

It is more like a large pond, than a lake. During August you can hardly see a patch of water on it. It is covered in lily pads and wild rice. Most people don’t bother fishin’ in Blackface during the summer. All they catch is big piles of weeds.

A couple years before the guy stole my neighbors’ stuff, Sherriff Hurley and his buddies, discovered that blackface was just swimmin’ with fish. But the problem was you couldn’t get the fish during the summer on account of the weeds. So a couple times a winter they would go out on the lake, do some ice fishin’, and get stupid drunk from Hurley’s home brew and Milwaukee’s Best.

After I got to Blackface, I saw Hurley and his gang yaking up a storm around a camp fire in the middle of the lake. I rolled down my window and yelled.

No answer. I tried again louder.

Still, no answer. So I got out of my Dodge Ram and started making my way onto the lake.

I couldn’t see too far across the lake on account of my eyes not working well. In fact, when I was young I wanted to be a pilot. I wanted to soar through the skies and hunt down the Red Barron. Unfortunately my eyes didn’t work well enough, so I ended up serving my country in the GI. The GI is why I why I limped across Blackface so slowly. When it’s cold out, I can feel the exact point where the shrapnel tore into my leg.

In Korea in 1950 I was serving in a special unit that was going to photograph the enemy base. Unfortunately we never found the base. We circled and circled until finally we gave up and landed. We landed right on the base.

A hand grenade took out the majority of my thigh muscle. I was a prisoner of war for two months—the most impactful months of my young life. I am reminded of Korea every time I walk.

The snow on Blackface was deep, but hard. So I could stand on top of it fairly easily without sinking in. I just had to be careful not to step too hard or I would get my foot stuck. I shuffled my feet along slowly as not to disturb the snow.

“Huuuuurrrrrrlllley!” I yelled when I got closer. “I pay my taxes like everyone else! Can I get some police help?”

When the guys saw me they were a bit startled. They didn’t expect me to come shufflin’ up to them. Hurley’s friend rushed out to meet me.

“I need to talk to Sherriff Hurley right now,” I said to the man. The man was nice and offered to give me his arm while I walked toward Hurley. This made my old legs much steadier. Normally I pride myself on my independence, but it special cases I’ll take a helpin’ hand. Besides, I needed to hurry in order to catch the criminal.

When I reached the fire, Hurley tossed me a Milwaukee’s Best and asked me what brought me out to the middle of Blackface today.

Before my shivering mouth had a chance to answer him, a snowmobile came racing onto the frozen sheet of ice and parked alongside the fire. Riding on that machine was the same man that had taken my tackle box. I couldn’t believe my old, broken eyes!

“Burt,” The men shouted as the robber got off of his snowmobile. They were acting like this evil man was their best friend. What a scandal.

So I discreetly opened my beer and called Hurley to the side and whispered to him. I told him about my tackle box, the TVs, and all my neighbors’ neat things. Hurley just smiled and nodded.


He knows everyone and everyone knows him too.

The Sherriff called his friend Burt over to his side, put his arm around him and asked, “Did you steal a tackle box today Burt?”

Normally a guy who steals would have no problem lying about it. But Burt didn’t lie. You see, folks around Ball Bluff have too much respect for Hurley to lie to him. I know I would never lie to him.

Burt never went to jail and never paid a fine.

Hurley left his ice fishin’ spot and rode on Burt’s snowmobile back to the summer people’s cabins. Hurley made Burt put all the stuff back where it came from. Along with the stolen goods, urleyH Hurley also made him leave a hand written apology notes.

I heard Burt was really embarrassed.