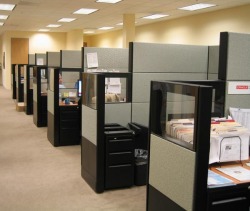 Dirk probably woke up the next morning feeling great.  His wife had ironed his clothing the night before so all he needed to do was jump in his recently remodeled shower, put his clothes on and go.  After a surprisingly traffic free drive to work, Dirk sat down in his office so that he could figure out what was on the agenda for today.  He tapped a pencil against his cheek as he thought about what he was going to do.

“I could write up that proposal Mr. Henderson wanted me to do, but I’m kind of tired from repeatedly making love to my beautiful wife last night.  I know Clarence looked really busy when I came in, but I’ll have him write the proposal any ways.”

Dirk strutted over to Clarence’s desk and tapped him on the shoulder, disturbing him from his important work.  Clarence quickly looked up towards Dirk and mistakenly looked at the neon light on the ceiling and was temporarily blinded.  While Clarence was recovering from looking at the light Dirk told him that he needed him to write up a proposal for their boss.

“But…” Clarence tried to tell Dirk he had other work, but was quickly cut off.

“Thanks a lot Clarence, you’re a real good sport.  Just drop it off in my office when you‘re finished.”

Dirk quickly trotted off to his plush corner office and closed his blinds.  Clarence set aside his important work he was doing and began putting every ounce of effort he had into writing out the proposal.  Although Clarence was hungry around lunch time he didn’t get a chance to eat because now had double the work to do.

Finally at around three o’ clock Clarence had finished writing and revising the proposal.  It was something that he could be proud of.  He quickly left his desk, knowing that he needed to waste as little time as possible, to bring the report to Dirk.

Without knocking, he swung Dirk’s office door open and couldn’t believe what he saw behind it.  Dirk was lounged in a reclined position, sound asleep behind his desk.  Dirk shook his head and almost tipped his designer leather office chair over when Clarence opened the door.


“Haven’t you ever heard of knocking?” Dirk screamed.


“You bet I’ve heard of knocking.  I’ve also heard of working. And, oh yeah, I’ve heard of not dishing my responsibilities out to others when they are twice as busy as me.”  A crowd was gathering behind Clarence as he continued his rant. “Another thing I’ve heard of that may surprise you is that it isn’t a great idea to take a five hour nap on company time.  If you’re going to be running this company at the end of this month then I’m quitting, and that‘s final.”

Clarence stood in the office doorway lobster red, huffing and puffing.  It looked as though he was going to burst.  Dirk stayed in his chair with his hands over his face.  The crowd behind Clarence had grown larger.


“Nothing to see here,” Mr. Henderson yelled as he walked towards

The crowd separated the parting of the Red Sea.  Clarence left with the crowd as Henderson came near him, but stopped just around the corner by a vending machine so that he could hear what Henderson was going to say to Dirk.

“Dirk, Clarence is a good employee.  All of the employees need to like their manager, if you get one employee to hate you then employee’s feelings can spread like a plague to the other employees.  I suggest that even though he may have been wrong to explode on you like that, that you apologize.”

“What do you want me to do?  Bring him to my house for dinner or something,” Dirk said sarcastically.

“That is exactly what you’re going to do.” Henderson replied.