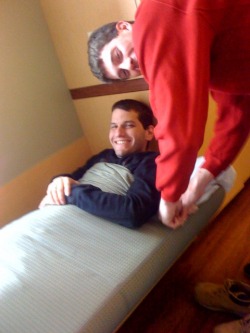 “You see,” Dan continued, “The world isn’t nearly as complicated as many people make it out to be.  Everyone wants the same things.”

He raised his hands up and began counting on his fingers.

“People who commit crimes or hurt others have just been put in a position where they can’t have one or more of these things.  And they think ‘hey if I do this crime I’ll have one, two, and/or three.’  This philosophy works without fail until you add in jealousy and rage.”

What Dan realized while he was talking to The Dream Doctor’s call screener was that even without being on Conan O’brien, he could still make his philosophy known to the world. All he needed to do was get his philosophy on Maximum Exposure, Worlds Most Extreme Video, or Cops.  Dan was not the first to try this, every episode of Cops has the same structure.

Dan was on a mission.   He needed to keep babbling on about his philosophy on life until a drunken redneck or gangster started to commit a crime or something extreme happened.  Dan had now been babbling for nearly two weeks and he had yet to see his coveted redneck.

His beat up Jeep Wrangler was currently parked in a ditch off Highway 169.

Mid philosophical babble Dan saw something that made him perk up like a ground hog who just tried pop rocks.  A semi truck forced a small silver sedan off the road. The sedan rolled into the ditch in a massive ball of gravel and dirt. This was the extreme action Dan was looking for. After the accident, the semi pulled into a ditch on the side of the road, paused for a few seconds, and took off down the highway.

Dan flipped his camcorder towards the road and said, “Prepare to meet your match evil doer.”

As soon as that line came out of his mouth, Dan knew that this would be the call that was going get his philosophy out there.  Dan was no longer just a kid with a camcorder; he was going to be a T.V. star with a catch phrase.

His Jeep tore up bits of soft earth beneath it and effortlessly accelerated to 70 mph, closing the gap between Dan and the semi.  Dan’s plan was to get the license plate on his camcorder and catch the perpetrator of this hit and run.

When Dan passed by the silver sedan, he noticed that even though the car had landed upright about two minutes ago, no one was getting out. The driver of the car must have been injured. Dan was at a philosophical and moral crossroad. Should he catch the bad guy? Or should he help the injured motorist?

Dan painfully put his foot on his break peddle and turned toward the wreckage He wanted the fame of catching the criminal, but he knew that he couldn’t live with himself if he left this injured person without helping.