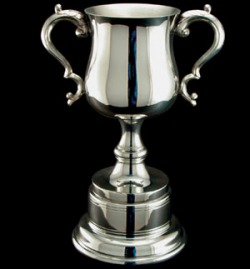 Dirk approached the plate through a cloud of white grip chalk that he had created by brushing his hands against his muscular thighs.  The sunlight flashed in his eyes causing him to squint, a Clint Eastwood squint.  He brought his Easton aluminum bat to his shoulder, his shirt sleeve rose on his arms revealing his massive, toned biceps.  A few married ladies in the crowd noticed and gasped like school girls.  The pitcher tossed the ball toward Dirk underhand with a high arc.  He kept his eye on the ball as he transferred all of his weight to his right leg, rearing back, ready to pounce.  Then he swung a hero’s swing and connected perfectly with the ball.  The crowd cheered as the ball flew high above the tree tops and far beyond the fence into a parking lot, breaking the window of a Chevy Astro Van.

Thanks to Dirk Studdler, the Henderson Pharmaceuticals Softball team had won the Northern Metro Softball Championship.  The employees of Henderson showed up at their company softball games as most high school students showed up to their school’s football games.  They also worshipped the heroes of the last week’s games much as high schoolers worshipped their sports heroes.  For yet another week Dirk would be reveling in his co-worker’s worship.

Dirk walked along side Dick Henderson, the elderly owner of Henderson Pharmaceuticals, to the middle of the baseball diamond to accept another trophy that would be displayed in the main lobby of the company headquarters.

“This trophy is for all the little people at Henderson,” Dirk shouted with the trophy raised above his head, “those little people that make Henderson the best place on this planet to work.”

The crowd erupted into cheers and everyone began chanting Dirk’s name.  Dirk was used to moments like these; he had been an all-state quarterback for his high school and an All-American wide receiver for the University.  He loved when the crowd loved him and the crowd loved loving him.