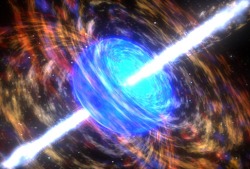 All of Jonny Carpenter’s students were idiots. Complete morons. Buffoons.

No wonder the famous Professor Schmitz had Jonny do all the grading, lecturing, teaching and most everything else. These kids weren’t going to amount to anything anyways. Why bother exerting any effort?

Jonny had just spent the last two hours grading papers on Einstein’s Theory of Relativity. In other words, he was reading the same Wikipedia article slightly reworded by each of his 75 Iintro to Pphysics students.

The Professor was probably at some gala event being praised for how brilliant he was, while his assistant, Jonny, sat in his lonely apartment dreaming of a more extraordinary life. Jonny continued grading and dreaming until he heard his computer make the familiar beep that signaled the arrival of a new email.

He swung his chair around so it was facing his computer. He had the professor’s email account open, as well as his own. He made a few clicks and found the new email was intended for the Professor. He had access to his superior’s account because the idiots often emailed their papers when they were too “sick” to come to class.

The new email was from a man named Hugo Whitney.

What could this buffoon want? Jonny thought.

He double clicked the subject line and a life changing message took over his screen.

I found your name on the internet while searching for information on the M  Theory or as you call it in your book “The Theory of Everything.”  My name is Hugo Whitney and I am an independent researcher that specializes in the ancient cultures of South America.

The reason that I am contacting you is because I have reason to believe that Aztec royalty in the 11th century had knowledge of M Theory.  Before you write me off as a crazy conspiracy theorist or a prankster, please take time to examine the file that is attached to this email.  The file is a series of digital photos that were taken on the inside of a cave near Lake Texacoco in Central Mexico.  The final photo I’m sending you is of a widely used Aztec symbol that represents their homeland, Aztlan. Please contact me A.S.A.P either by phone or email.  Your knowledge could help me to unlock a mystery I have been trying to solve for almost 30 years: Where is Aztlan?


As soon as Jonny opened the email he felt a shiver race down his spine and exit his giddy body in the form of a quite noxious burp.  He assured himself that there was no way that a  I underlined this because I don't get it.  What are you saying here?barbaric  ancient society could have come to understand something that even modern scientists were still baffled by.  But just as a matter of curiosity, Jonny scanned the file for viruses and downloaded it.

When the first digital photo popped into view, he couldn’t make any sense of it.  It was simply a horizontal line carved into a flat cave wall with a tally mark above it.  The second photo that popped up didn’t make much sense to the assistant physics professor either; it was a combination of the first horizontal line with a vertical line crossing over it, a cross.  That photo had two tally marks over it. The next photo began to make sense to Jonny.  There were three tally marks at the top of the photo and the design below was a cross with diagonal line through it.

“Amazing,” Jonny quietly said out loud.  He was looking at evidence that somehow an ancient civilization understood that our world had three dimensions.

“Height, width, and depth,” Jonny whispered to himself. “Could I be  looking at the first three dimensional piece of art in the history of mankind?.”

Jonny clicked to the next photo and it sent an even more spectacular shudder down his spine. This exceptional shudder exited on the opposite end of Jonny as the original one.

This picture had four tally marks on the top, the symbol for height width and depth, and below the symbol was a carving of two figures.  The first figure was obviously sprinkling seeds; the second figure was harvesting crops.

“Ummmmm…. I think that means time. How the hell would they know that time was one of the dimensions, I thought that wasn’t even considered until Einstein and Gauge tried to create the first Unified theory,” Jonny said to himself.

The last picture had 11 tallies at the top.  There was the symbol for the four dimensions along with seven additional curves.

Jonny felt a bead of sweat fall down his cheek and than wiped off his forehead as he said, “So I guess this Hugo guy may have a point, the Aztecs may have known about Unified and String Theory. Assuming these eleven marks represent the dimensions.”

He sat back for a moment and was overcome by the ecstasy of a powerful thought.

Numbers and figures that Jonny had learned in school were suddenly making sense. He closed his eyes and savored the joy of mathematics fornicating in his head.