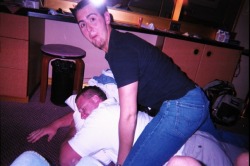 “Dan,” Xander said so that the entire bar could hear him. “Do you understand that black holes and quasars have been shown to have properties that have the ability to bend space and freaking time? End of argument: Time travel is possible.”

“No way, no how, and definitely not in my lifetime,” Dan replied. “You don’t even understand what time is!”

This argument had been fought on so many occasions that Joey could almost predict the words that were going to come out of his friends’ mouths. He would have liked to jump into the conversation, but trying to speak loud enough to talk over a table of intoxicated twenty some things was far too much effort.

“Shut up, Shut up, Shut up!” Andy Burk, one of the original members of The Ghetto said. The entire table grew silent as they obeyed their friend’s command and waited for what was so pressing in his mind. Everyone pivoted their heads and saw him turning beet red with his eyelids squeezed tightly together. The guys all knew what would happen next so they simultaneously scooted their chairs away from the rectangular table. A loud mass of gassy vapors erupted from Burk’s anus with a loud disturbing roar followed by a burst of laughter from a drunk Burk.


“When I travel back in time, I’m going to plug you up so I never would have had to smell that!” Xander yelled.

“But, what if time is an illusion?” Burk retorted. “What if our memories of the past were just God’s way of fucking with us? Time could be just a ploy so that what we are feeling at the present time makes some kind of fucked up sense.”

“If that’s the case than you never would have ripped ass in ‘da first place,” Steve, the tallest and currently drunkest of the friends said.

While the group continued their misinformed argument about physics and the make up of the time space continuum, Joey had the beginning of a very rare and remarkable thought.

“Let’s go through what we’ve learned tonight,” Xander said as the waitress took the orders for the next round of drinks. “Screeewwww what Einstein says! Screeewwww what Stephen Hawking says! We should all listen to Dan and his vast understanding of physics, time, and the nature of our universe.”

Joey ordered a cup of tea. He figured tea was good for the type of thought he was having. He informed the server that this would be their last round before they needed the check.

After finishing their final round at O’Donovan’s six of the guys left the bar and grabbed a cab to a Bootlegger’s— a trendy club in downtown Minneapolis. Dan, Burk, Steve, and Xander decided to ride with Joey.

The group struggled to find Joey’s van anywhere in the vicinity of where they thought they had parked it. They raced up and down the streets until Joey realized what had happened. They had parked in a No Parking Zone and his van had been towed.

Joey wished he could travel back in time and park in a different place.